Not only has Cjc1295 shown the ability to increase hormone and secretion and its benefits, but it has been able to do so in very large amounts. Recent research studies have shown that CJC1295 stimulates GH and Secretion, and will keep a steady increase with no increase in prolactin, leading to intense fat loss, and increases protein synthesis.

as they produce a short pulse.

CJC-1295 is basically a peptide hormone that acts similar to growth hormone releasing hormones (GHRH),it is beneficial to athletes because it can bioconjugate with circulating albumin and increase the time it can be used for medical purposes. It achieves this by preventing degradation of its amino acids. With a single dose, it can remain in the body for quite a few days and can cause the growth hormone to be released many times per day. This reduces the frequency of injections needed.

CJC-1295 increases the production of growth hormone as well as IGF-1 - which has anabolic effects in adults. However, it does not increase the levels of prolactin - high levels of which can create impotence and mental health problems in men. By increasing these two hormones, it enhances protein production in the body, which in turn, boosts muscle mass. It also induces lipolysis - the breakdown of fat tissue, boosts recovery from injuries, increases bone density, and also reduces aging factors like skin wrinkles. It can also stimulate cell growth, due to which it can be used to treat withered tissue or organs.

GHRH's are paired specifically with GHRP's in order to create a synergy between the peptides that will unlock the body's own stores of growth hormone. Even though many peptides work in some capacity by themselves, it is most beneficial to run your GHRH alongside a GHRP. This is why CJC 1295 is highly desirable, and it's one of the most widely used in the bodybuilding community. Right now, it has been debated which CJC 1295 is best to use. While MOD GRF (CJC 1295 no DAC) is commonly used with GHRP's to increase pituitary GH pulse, more frequent injections will need to be administered. The CJC 1295 with DAC will result in a series of smaller pulses; therefore, injections will be less frequent - often two to three times a week.

DAC Or No DAC?

As I have just stated above, when a person sees the term CJC 1295 without DAC this is really means that they are looking at MOD GRF 1-29. This tetrasubstitued peptide is a modified version of the original GRF 1-29 peptide better known as Semorelin. Due to the extreme short half life of the original GRF 1-29, chemists were able to modify the peptide to offer a longer biological activity that reduced the metabolic clearance. Although with MOD GRF 1-29 its modification had resulted in a greater peptide bond, the average user will still likely need to inject two to three times a day with a GHRP to get the maximum effectiveness for releasing endogenous growth hormone.

CJC-1295 DAC has shown some amazing results as a hormone releasing hormone (GHRH) analog. Not only has CJC-1295 shown the ability to increase hormone and secretion and its benefits, but it has been able to do so in very large amounts. Recent research studies have shown that CJC - 1295 stimulates GH and Secretion, and will keep a steady increase with no increase in prolactin, leading to intense fat loss, and increases protein synthesis.

CJC-1295 DAC is a long acting Hormone Releasing Hormone, which causes the anterior pituitary to release more hormone. GHRH is released in pulses in the body, which alternate with corresponding pulses of somatostatin (-hormone inhibiting-hormone). Clinical Research was first conducted for CJC-1295 during the MID-2000s. The objective of the peptide was to treat visceral fat deposits in obese AIDS patients, as increased levels of exogenous are presumed to increase lipolysis (fat loss).

- Allows for normal growth in short children with GH deficiency.

- Reduces wrinkling of the skin and some other effects of skin aging.

- Re-grows internal organs that have atrophied with age.

- It increases muscle mass through the creation of new muscle cells (which differs from hypertrophy).

- It promotes lipolysis, which results in the reduction of adipose tissue (body fat). 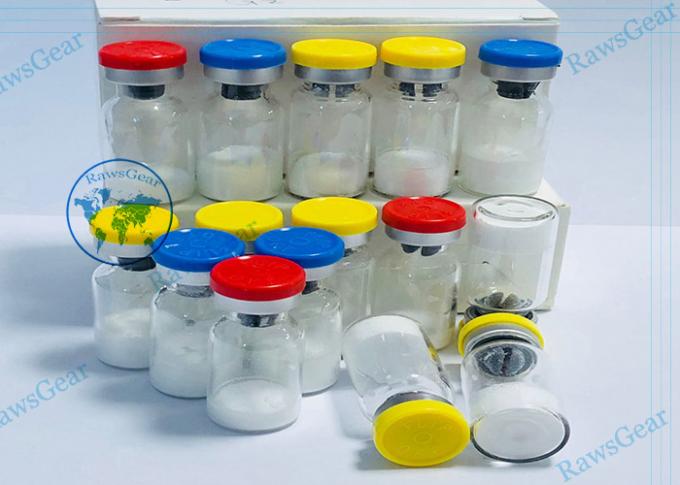 1. Sufficient stock, to delivery promptly at the very day when receiving the payment.
2. Sophisticated and professional logistic agent.
3. Well-trained and disciplined packing team. Unique ways to ship goods to your destination. Fast and discreet shipment could be arranged for customs pass Guaranteed.
4. Packing pictures and tacking code are provided within 12 hours after receiving the payment. Updated tracking information will be provided every other day.
5. After-sale service: Any questions or problems after receiving the product, please feel free to contact us. Problems would be solved immediately.

1. Quality guarantee: we are a leading professional factory in China special in pharmaceuticals (featured anesthetics, steriods, and peptides) for more than 14 years. Our product sexported to all over the world.
2. Discreet packing: The best-suited package would be selected to pass customs 100% guaranteed. The package updates would be closely tracked and timely informed. Once any problem found, the package would be reshipped for you.
3. Alternative delivery ways: by land, by air, by sea, by express(FedEx,UPS,DHL,EMS etc.). The most cost-effecient forwarder would be recommanded.
4. Considerate after-service: 24/7 at service for you. Any problem would be valued and solved ASAP.
5. COA (by HPLC) and sample are available at any time.